RF24Ethernet, What is it and how does it work?

For anybody not familiar with my blog, I have done a lot of recent work in improving the radio driver and related network library for NRF24L01+ radio modules, using Arduino and Raspberry Pi or using two or more Arduinos. These very inexpensive and feature-rich devices can be used to create your own home sensor network, with very little cost when compared to most available solutions.

RF24Ethernet will allow you to use a Raspberry Pi or Arduino as the 'gateway' machine to your network, and lets you connect to your sensors directly, using any device that has a web-browser, whether it is an iPod, PC, etc. or your sensors can connect out to the internet for information.

How it works: (Updated)

The RF24Ethernet library is currently in the testing phase, and uses the UIP TCP/IP stack.
The library has been modelled after the Arduino Ethernet library, allowing users to create web enabled, wireless devices, without having to learn the RF24 or RF24Network APIs. The addition of a real protocol (TCP) on top of RF24Network provides a level of simplicity, consistency and reliability beyond what was previously possible.

The IP address of each node needs to be statically assigned. Translation between RF24/RF24Network (MAC) addresses and IP addresses is handled in one of two ways, depending on the configuration. The default configuration uses ARP requests to find the correct node when TCP data is incoming, and users can optionally utilize RF24Mesh to provide MAC/IP translation and/or dynamic address assignment at the network layer.

Configuration is now integrated directly into RF24Ethernet, with the RF24Network address specified as the MAC address, and this can be further automated by utilizing the RF24Mesh layer along with RF24Ethernet. Users have the option of creating a static network, or utilizing RF24Mesh to create a dynamic network with nodes capable of moving around physically or utilizing fail-over nodes. The RF24toTUN application running on a Raspberry Pi automatically performs discovery and routing for incoming TCP/IP data, so users only have to configure static IP addresses, and a unique identifier for each node when used with RF24Mesh.

RF24Ethernet - Setup, config and demo
The initial proof of concept interface borrowed directly from the SerialIP library, using the uIP TCP/IP stack and uIP proto-sockets/proto-threads. Since testing was very succesful, the library has been developed to provide a simpler user interface, very similar to the Arduino Ethernet library. In its current form, a node running RF24Ethernet can act as a standard TCP server, and can function as a telnet or web server, by modifying the included example.

How can this be used?

The possibilities from here are virtually endless, with very inexpensive sensor networks being provided with direct TCP/IP connectivity. One of the more obvious applications involves simple retrieval of information from network or internet sources, such as the time or the current weather. Controlling a connected LED or other attached device can be as simple as opening a bookmark in your browser.

To take things a whole lot further, this could even allow RF24Network to be utilized as a bridge betwen LANs, using sensor networks for emergency commuinications etc, when main connections are down. Testing shows that speeds  across the network are slightly better than or equivalent to a dial-up connection, so it seems to provide a practical solution for low-speed data transfers like sensor data, text-based email or chat. 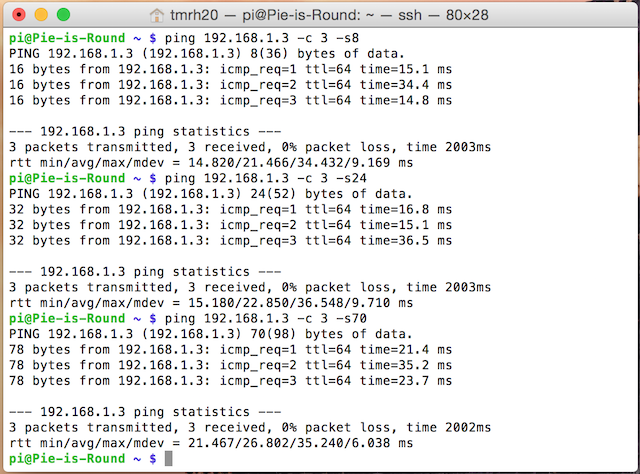 The above picture presents an idea of the latency, etc when sending ping requests of varying sizes from the RPi master node to a connected sensor node.

Update Nov24:
Working with UIP TCP/IP stack has been a bit of a challenge to say the least, but things seem to be coming along nicely. The RF24toTUN library has been updated to route payloads according to the radio MAC address, so integration with RF24Network is coming along nicely. Support for the RPi to send fragmented multicast payloads has been added, so ARP requests are working nicely within RF24Network. This will allow full integration with RF24Mesh, to create a dynamic TCP/IP mesh sensor network if desired, with very little to no configuration needed by the user. I've commited the current code to a new branch (master_dev) to hold the new code until it is cleaned up and more functionality is added. Currently, it only supports incoming data connections as a simple server, and ICMP packets.

Update Nov30:
The Server and Client API to match the official Ethernet library is now in place and working for the most part. DHCP, DNS lookups and UDP in generall is not developed yet. There are still some bugs and oddities to work out, but overall, the TCP server and client seem to perform fairly well given the circumstances. Web client and server examples have been included.

Update Dec 7:
The library seems to be working very well now, and the API is about 95% complete. Most bugs have been addressed, with only a few minor issues left, generally surrounding timeouts during very large data transfers. The existing examples have been updated, and some new examples have been added, demonstrating a simple web server and interaction with a sensor node via a web browser. Some documentation has also been created and is linked below.

Update Dec9:
RF24Mesh has been integrated with RF24toTUN, to provide automated addressing and mesh support for RF24Ethernet. When building RF24toTUN, use 'sudo make install MESH=1' to compile with RF24Mesh support. If using with RF24Ethernet, see the new SimpleServer_Mesh.ino example for usage. An install script has also been created for RPi, to simplify installation of the various libraries.

Update Dec 14:
Updated RF24Ethernet to support SLIP or TUN devices as well. This requires RF24Mesh to perform MAC/IP translation. Two new examples have been added, SLIP_Gateway.ino demonstrates how an Arduino can act as a simple USB interface to any device that supports SLIP. SLIP_InteractiveServer demonstrates how to use RF24Ethernet and RF24Mesh with a SLIP or TUN interface.

Update Dec 28:
Modified the MAC address format due to issues with standards when using it on RPi/Linux. Modified the timing of uip restarts. Updated RF24toTUN to provide cmd line configuration for all major options including node addressing. Fixes and updates to RF24Network and RF24toTUN seem to have addressed some buggy behaviour.

Update Dec 30:
Todays latest updates should be applied along with the latest updates to RF24toTUN and RF24Network. The main change fixes corrupt client requests, which would have been noticed when establishing outgoing connections. The remaining changes revolve around reliability, the order of operations, and the timing of things, and seem to really bring RF24Ethernet closer to a stable, reliable library.

Update Jan 2, 2015
This round of updates comes after a very long round of testing and coding. The RF24 library has been updated to provide even better timing, reliability and throughput. Changes to RF24Network improve fragmentation/reassembly. RF24toTUN has been updated to fully support all 3 datarates, and throughput has been improved for all speeds. RF24Ethernet has been updated to provide a timeout for connections, part of better handling for TCP window reopening and failures, and allows users to configure the periodic timer via uip-conf.h to provide faster transfers. These changes bring RF24Ethernet a lot closer to a stable release. Testing shows that these updates provide easily noticeable increases in reliability and speed at all levels, and updating all the mentioned libraries is recommended.

Update Jan 4, 2015
Added connection timeouts to recover from hangs during failed client donwloads, which adds improved reliability to the library. Added better TCP window management to prevent those hangs during client downloads, along with configuration options. Documentation updated to include new features and options.

Update Jan 16, 2015
Updated to v1.2b - Adds UDP and DNS support along with a pile of fixes and updates. Users should update RF24Network and RF24toTUN along with RF24Ethernet. This will be the final update to this blog post. See the documenation below or check back here at tmrh20.blogspot.com for additional posts.