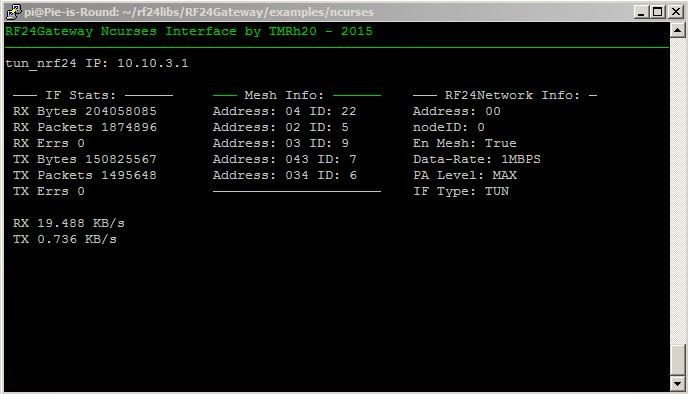 
RF24Gateway is a new complimentary library to RF24Ethernet, designed for RPi and Linux based devices with SPI and GPIO capabilities (BBB, Intel Edison, Galileo, etc).

The RF24Gateway library acts as a network/internet gateway, and allows Arduino/AVR based sensor nodes to interact with each other, the environment, and the world using TCP/IP and/or lower level RF24Network messages.

In short, it allows hybrid IoT networks to be created using Arduino and nrf24l01 modules. Some nodes are capable of internet or local network communication using standard protocols (TCP/IP) and/or RF24Network messages, while other nodes can communicate only at the network level, using only the lower layer RF24Network messaging.

Once RF24Gateway is configured, nodes can be controlled completely using standardized tools and protocols. Additional client examples have been added to demonstrate how to control and/or receive information from sensor nodes using standard tools and scripting methods via Bash, NodeJS and Python scripts. Any method of establishing a TCP connection can be used, with the examples generally using HTTP to some degree as well.

Libraries and code that utilizes RF24Network can utilize RF24Gateway in much the same way, since external data types (TCP/IP) are handled out of sight from the user. RF24Network is used exactly the same way, except that the gateway.update() function is called instead of network.update() or mesh.update(). The included examples demonstrate usage.

Note: RF24Gateway defaults to using a TUN interface with RF24Mesh enabled. RF24Ethernet examples have been updated to accommodate this.