RF24Mesh is a C++/Arduino/Linux/Raspberry Pi library allowing many devices to simultaneously connect wirelessly and remain connected in a mesh style network using nrf24l01+ radio modules. Nodes can communicate with any other node on the network, including a master node that acts as a gateway for the mesh, providing addressing and lookups.

Once assigned a unique ID, everything is automated, and nodes can move around and rejoin the mesh at any point where another node is in range. RF24Mesh supports some of the smallest and most power efficient devices available.

The RF24 Communication Stack is based on the OSI model, and RF24Mesh makes use of the features of the lower layers (RF24 (Layer 2) , RF24Network (Layer 3), and the overall capabilities can be extended via RF24Ethernet (Layers 4&5 TCP/IP)

The main thing when setting up a mesh network is to configure and test your devices accordingly, to make sure they are in a fully operational state. Most if not all of the available radio chips being sold are clones, so I've found it necessary to modify the radio devices slightly in some cases. In many cases, a capacitor (10-100uF) is added directly to the VCC/GND of the module itself to help with common power supply issues.

In the case of these modules, I've found that scraping down the last bit of the antenna, and soldering on a small 3-4" piece of wire greatly improves their performance:

In the case of the high powered PA + LNA modules, I've found it necessary to add shielding as in the post found here. Placing them close to a ground plane seems to help as well. Operating them at a lower power level may be required if the power supply is not adequate. 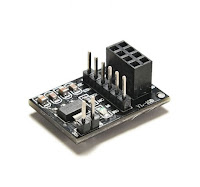 The modules that are low powered with an antenna generally work out of the box.

I generally recommend using an adapter, to provide a stable power source, even for the low powered modules. I've been using them with many of my modules.

From there it is a matter of installing the Arduino libraries etc. which is covered in the documentation and in earlier blog posts and the official documentation below.

How it works:
RF24Mesh leverages the features provided in the supporting libraries, RF24 and RF24Network to provide connectivity between many devices, even if they are far away from the central node or moving around. Each node is assigned a unique identifier (1-255) and uses that high level-address to request a dynamic address at the network layer, according to the structure of the mesh and proximity to other devices in the mesh. Nodes typically communicate using the RF24Network API, with RF24Mesh working at a higher layer to provide address lookups, dynamic addressing and connectivity.
Nodes arrange themselves using a tree topology around the master node, which provides address lookups etc. for the mesh. At any given time, each node has a path of communication through the network, and can re-establish and verify a new link if the current path fails. In each network there is the master node (the base node), children of the master node (relay nodes) with children nodes themselves, and leaf nodes, (children of the master or its children) with no child nodes attached.
The protocol is fairly simple for each node. On power up or reset, nodes attempt to find a connection by using multicast. Multicasting is arranged into 5 levels, so the master node is contacted first, then its direct children, then their direct children and so on, making the way nodes attach themselves to the network tend towards close proximity to the master node in a tree-like structure. Once contact is made the node requests an address from the master node, either directly or through other nodes. Once an address has been assigned and verified, the node is considered connected to the mesh and can then communicate with all other nodes in the mesh, and beyond to other systems etc.
Nodes have the option of managing their connection however desired, and quite often, a simple timer is suitable to verify connectivity after a set period of time. Transmitting nodes can also detect when communication is failing and re-establish their connectivity to the mesh as required. That is, at any given time, nodes will have a single path to communicate over the network, but if that link fails, they can re-establish their communication path through the network.
The communication layers are interoperable, meaning a network can combine devices running RF24Network and RF24Mesh libraries together, with static nodes running RF24Network, and dynamic nodes running RF24Mesh. Devices running RF24Ethernet (TCP/IP) can also communicate using the other layers of the libraries, interacting directly with RF24Mesh and/or RF24Network nodes. This allows an array of devices to operate on the same wireless mesh network, from ATTiny all the way to the more powerful devices like ESP32 and Raspberry Pi, using the RF24Network, RF24Mesh APIs and/or standard networking tools and protocols. (ICMP/TCP/UDP, etc.)
Current status, testing etc.

RF24Mesh is now past the development/beta testing stage and considered (by me) to be stable and well tested. The mesh can handle a large number of nodes, theoretically up to 255, but in practice, more like 15-25 nodes sending or receiving data every few seconds is a reasonable bet. It generally depends on the type of traffic and frequency with which it is generated, as a much larger number of nodes reporting data every minute presents only a small load for the network.
The progress made with RF24Mesh is very encouraging, supporting simple communication scenarios, small household sensor networks, home automation systems, and larger expanded networks stretching over relatively long distances with the more powerful RF24 modules.
The RF24 communication stack is generally complete, with bug reports and issues dropping off quite nicely, but development is still ongoing. As always, please report any potential bugs or issues using the GitHub link below.
Documentation:
http://nrf24.github.io/RF24Mesh