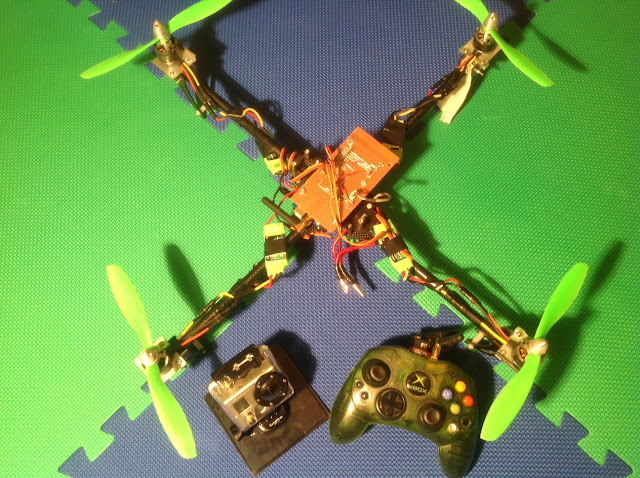 The quad, controller, and camera 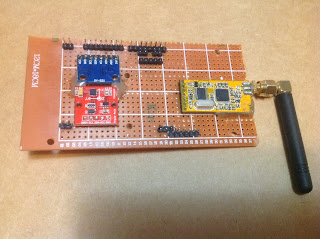 The flight control board is based on FreeIMU and built onto an Arduino Mega 2560 running MultiWii. The main goals were to build a customizeable and affordable quadcopter using mainly open source hardware and software, and learn a bit about how it all works. Bugs and design issues seem to have been worked out now, so it looks like this will be the base design for my board. Video

Since it is all open source, adding additional custom components to control lights, sound, servos, etc. is about as easy as it gets. For anybody already familiar with Arduino, it's just a matter of  choosing what customizations to add.

The top picture on the right shows 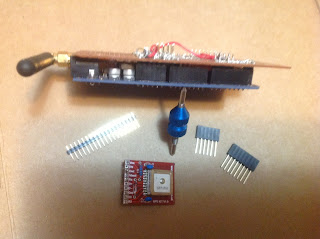 the simplicity of  the FC board, using only a few modules. A previous mock-up of the board was scrapped due to some simple design flaws. The current version attempts to address some of those problems:


a: Although the shield fits tight, secure mounting is a must, and nylon standoffs are used to secure the shield to the Arduino.

b: Here I am using a cheap, single sided prototyping board, but we'll see how long it lasts...

c: The first mock-up used the female header pins as shown on the right of the bottom pic, but they aren't made for Arduinos (too thin), and caused I2C errors and subsequent crashes. The header pins shown on the left are thicker and fit snug every time.

d: The GPS module was left out since GPS nav won't be something I'll be using right away.

The ESCs connect to pins exposed on the top of the board, which are hard to see since the angle of the bottom pic purposely hides my shoddy looking soldering work. The Arduino gets fastened to the frame using rubber mounts taken from broken CD/DVD players to minimize vibration.

FC Board:
The board is intially based on a FreeIMU board as mentioned previously, and is actually pretty simple to build at this point, with only 3 modules. The HMC5883L magnetometer module is connected to the aux. I2C lines of the MPU-6050, and running on 3.3V. An APC220 module is connected to the fourth serial port (serial3), and a GPS module can go on serial2 or via I2C if desired. The best part of the flight controller and quadcopter is that it is all based on open source software and hardware, so customization and prototyping like this is actually possible without spending huge amounts of money or time.

Since the controller and FC board are both custom made, I had to code and then debug the controller during flight in some cases, and had no failsafe at the time. The initial assembly of the central parts of the frame used all nylon bolts. This was to prevent damage to the frame and motors when big crashes happened, since parts would usually break away before breaking or bending much. It currently uses a combination of metal and nylon connectors to provide rigidity and allow for some give on big impacts. As can be seen in the picture above, I have also made my own motor mounts.

One of the problems I ran into in some of the first flights was individual motors cutting out seemingly randomly. The quad uses 20A Turnigy MultiStar ESCs, and gives a choice between slow-down of motors, and hard cutoff when the voltage is low. This caused a bit of frustration since the motors would start cutting out when the voltage was low, regardless of the setting via programming card.

I was confused by the MultiWii calibration code at first since, according to the ESC manual, it would basically just set the programming of the ESCs to the LiPo battery setting, and that hardly seemed like 'calibration':

b: These ESC will beep accordingly, move throttle to min to select what option to set in the programming

The ESCs apparently use this interaction for calibration as well, and it made a big difference once I programmed them this way. The motors seemed to sound a bit smoother afterward, and they slow down nicely to force a landing once the battery is low.

Always remove your propellers before uncommenting this line in 'config.h':
#define ESC_CALIB_CANNOT_FLY

Another important factor that was initially overlooked was propeller balancing. This made a big difference in the stability of the craft, as well as reducing vibrations. I followed this tutorial and had some good results on my first shot at it. Videos from the previous post show the vibration evident from unbalanced propellers, and a motor wire breaks in the second one, likely related to the vibration issues. 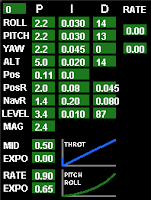 The videos in the previous post were shot using the PID settings shown in the pic to the right and with the low-pass filter enabled for the MPU-6050 at 20Hz in 'config.h'. Higher values for the filter makes for 'tighter' controls, but is more susceptible to vibration and affects PID. Mitigating vibration issues should allow a higher setting.

MultiWii Code:
Code base is MultiWii_dev_r1240
Uses slightly modified version, but can work with original: