The quad has been working well using the MultiWii RCSerial protocol and custom XBox controller for basic flight controls, so it seemed time to add additional capabilities. The controller code now uses the same type of implementation used in the actual MultiWii code for building and sending RCSerial commands, so commands are easy to structure and send. The default failsafe code doesn't currently work with serial commands, so some simple modifications were made to accomodate the serial based control. Additional mods to the protocol are still being made to accomodate some additional commands and features as well.

The flight control board has been updated with a GPS module and connections to monitor the battery voltage. Initial testing shows the quad can handle incoming commands while sending out data , so some initial coding was done using the Static Google Maps API and Processing to receive serial data from the quad, then display it on a map and plot the path taken during flight.

The sketch was designed to use the least amount of reasources possible, by passively listening for data to be sent periodically, and making use of the existing APC220 tranciever module on the FC board for communication. Here is a screenshot of the current iteration showing what it looks like in use. Here, the quad is actually sitting still, and the GPS is tracking around way off course for some reason, but it makes for a good demo of the tracking: 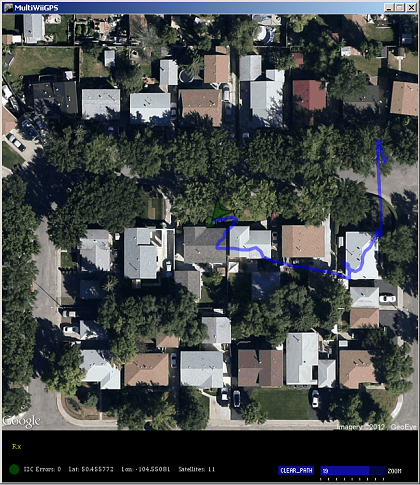 The above sketch is intended only for GPS functionality and basic status info, so will be kept fairly simple. It still needs work and requires some minor modifications to the MultiWii code. Right now it does the following:
- Displays location from GPS data
- Displays heading from magnetometer data
- Logs I2C errors with timestamps
- Plays warning sound if I2C errors are detected
- Zoom In/Out

Processing Sketch:
MultiWiiGPS
Notes:
- Requires minor changes to MultiWii. See the included readme for info.
- Will work with any serial-data based transceiver
- If it stops getting maps, get an API key here
- Requires ControlP5 library
- Ubuntu users require this fix for audio to work
- Designed/tested with MultiWii_dev_r1240

In addition to the GPS sketch, here is a link to the XBox controller code with initial integration of the RCSerial protocol. It is a work in progress, but the code is very stable, and it works great. See previous posts for details of the controller build.