Why a quad-copter? Time spent working on various projects involving robotics and automation have led me to a single conclusion: Flying Robots!

My first searches on the subject turned up various projects that offer pre-built units you can simply buy, connect, and fly, but the point here is to build a unit with interchangeable and customizeable Arduino-based flight and radio controls, and hopefully learn a few things along the way. This will also allow me to build, tweak, add or modify any component as required.

After receiving the main components: frame, motors, ESCs, battery, etc., the first thing I did was test out a single motor and ESC using DIY speed control (An Arduino). I have some 20A Turnigy MultiStar ESCs, so connected the orange wire to pin 9, brown to ground, and left red unconnected. Then, with the power connected to the battery, and using the servo library, I was able to get the motor going by using servo.writeMicroseconds(700); and ramping it up to about 800 to hear the beep indicating it is ready to go, and then up to 900 to get the motor turning. Ramping it up higher increases the RPM, so it seems pretty simple to control. Later experimentation showed that starting at 1000 and ramping up from there seems to work the best.


Setup for spinning motors up and first liftoff: 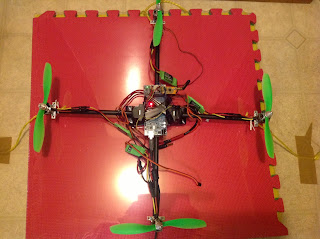 The initial testing was done using commands sent over the serial port, and the next step was to use wireless remote control so, of course, I used the newly customized XBox controller from the previous post to acheive that. The controller sends a variable and/or a value, (such as "S 1000" for a speed of 1000) and reception is as simple as Serial.read(); etc. Since there are multiple rotors, two must spin the opposite direction of the other two, along with having reversed propellers. The ESCs come with a simple programmer, so direction is easily controllable electronically. Along with the servo library, I was able to spin up all four motors and get the quad-copter airbourne for the first time, if just for a few seconds.

Next is final assembly of the unit and to try for some DIY flight stabilization. My first attempts at flight control will use the Proportional-Integral-Derivative (PID) library which takes an input (pitch,roll, etc) and adjusts an output (motor speed) to maintain a constant reading. This is the same type of thing the line-following-junkbot code attempted to do. Currently, I have an MPU-6050 gyro/accellerometer module connected, which I hope is enough for some simple stabilization. Prior testing required the device to be strapped to the floor with a few inchess of slack, just enough for it to get airbourne, and the same setup will be used here. As luck would have it, my frame kit is lacking in nuts and bolts, so I had to scrounge some up from various broken electronics, and the "feet" are not connected.

Above is the video showing the initial flight using untested and untweaked settings for the PID library and stabilization. Without PID enabled, the quadcopter lurches and jumps when the ropes pull tight, so this flight demonstrates that the stabilization is at least somewhat effective. Next will be to tweak and tune the PID, timing, and associated code for more stable flight, then probably on to controlling its movement.

This next video shows the quad once the PID settings are tuned a little bit better, as it demonstrates some actual stability. It is connected to the board via a large elastic, so whenever it pulls taught suddenly, there is a tendancy to jerk to the side, which the copter succesfully counteracts to a large degree. It took a fair bit of work to acheive this much stability, so a pre-bought flight control board is starting to look appealing.

Judging by its stability when under load and encountering some additional outside forces (from the tether), it may be time to start working on movement controls. They would simply adjust the balance point for the yaw and pitch, allowing me to direct its movements, and do some more fine tuning on the PID adjustements.

The MPU-6050 will be used in conjunction with an HMC5883L, which pretty much gives me the equivalent of the FreeIMU v0.4 board, minus the barometer. I've run the FreeImu GUI software, and succesfully calibrated my device, but the MPU-6050 library below seems to provide much more accurate readings, so I've been sticking with that. Since it works fine with the FreeIMU library, I attempted to use the MultiWii libraries, but have not had any luck. The sketch below is pretty basic, and only uses yaw, pitch, and roll readings for stabilization.