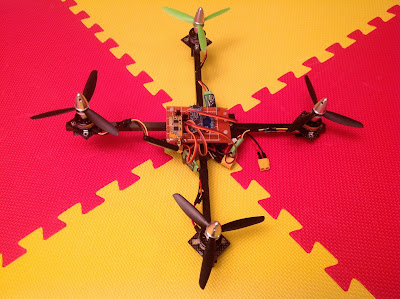 I've enjoyed building and flying my first custom Quadcopter based on an Arduino and FreeIMU, so decided to build another smaller version. The original really needs some wide open spaces to open up and fly, and I wanted something I could fly in more confined areas. This one is quite a bit smaller, measuring in at 13.5" compared to 21" and is much lighter. It is very similar to the first electronically, but uses a GY-86 module and Arduino Nano for the FC board. The IMU module has a gyro, barometer, compass, and accelerometer. It uses the same APC220 transceiver for control, but a standard RC unit is recommended in most cases.

Video from one of the initial test flights

As seen in the pics, the FC board is very simple, and I used the complex design method of 'connect the dots'. Just below the orange transceiver, jumpers can be seen which are used to disconnect it from the hardware serial port when connecting to USB for programming. The other pins shown just beside the Arduino are for connecting the ESCs, one of which powers the board. The Nano is mounted on header pins, so can be easily removed. This one was modelled somewhat after the first, but uses 10mm square carbon fiber booms and no aluminium mounts. The setup in MultiWii is pretty much the same, but with the GY-86 chosen under sensor definitions.

The 1.5mm sheet was cut into two squares measuring 1.75" x 5" for the main body, and holes were drilled through the booms to bolt them directly between the sheets. Drilling through the booms may not provide the most strength, but with a small well balanced quad, I'm hoping it will hold up. The motor mounts required both a top and bottom plate as well due to the thin layer of carbon fiber in the centre of the boom. Drilling through the carbon fiber sheets completely dulled a standard drill bit as well. 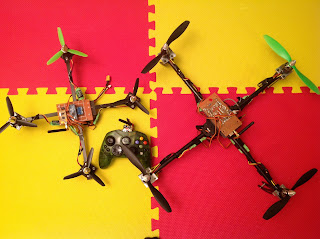 
A quick test flight with a 3S 1000maH battery and 3-blade 5045 props provided about 6 minutes of casual flight time, but it should be better with a 2S battery and 6" props according to eCalc. The tool also says the props will stall, but it hovers and moves nicely so not sure about that. The FC board is attached directly to the frame using some nylon standoffs, but vibration is minimal after balancing.
I had a lot of difficulty trying to balance such small props individually, so admitted defeat and went directly to dynamic balancing. I came across laser balancing in this video and I always keep some spare lasers around (who doesn't?) so I tried it, and the balance was the best I've achieved. I balanced the motors before adding the props/adaptors and re-balancing.

I had a few issues with these motors, since the mounts are a bit flimsy, and will break if there is excessive vibration. I've since attached the motors using hard rubber between the metal mounts and the carbon fiber to provide some give, and it seems to be working ok so far. Something also seems to have gotten into one of them, tearing apart the wiring, but it was easy to rewind with new magnet wire. Luckily, I bought 5 motors, but I may need to purchase a different type of motor if troubles keep popping up.