Ahh.. the junk bot. Built over a weekend, the initial idea is to control a lawn mower from the comfort of my chair, and possibly make it semi or fully autonomous. One of the problems includes it being Febuary with snow outside. Also is the fact that I don't have many of the required mechanical parts, so I went with a prototype using what would eventually be the circuit and logic that drives the lawnmower.

I recently bought an Arduino Duemilanove board and liked it so much, I got myself two Arduino Nano boards to play with. I soon realized I might be buying even more in the future... The two were put to use immediately for this project, one for the controller, and one for the JunkBot.

Basically, the Junk-Bot must use spare parts for everything I don't have. I plan to use this for a lawnmower, so no need to waste money on prototype or wait for needed parts. I want to get the electronics and logic built and tested, then I can attach some motors to a lawnmower, plug in, and rock out.

Drive Train:
One drive-train is from an old cassette player(Top Picture), with a wheel from some sort of toy car glued on with hot-glue. It uses pulleys. Elastic found in drawer used for one pulley, other was in-tact.

The other side uses a similar drive-train, but I don't know what device it came from. It uses gears and one pulley. The wheel is an orange-juice bottle lid glued onto a plastic object that fits nicely over the last gear on the drive-train. Wheel has rubber glued on. (from what seems to be an old inner-tube)

The poor 'third wheel' is probably from a tape drive too.

Frame/Body:
These are glued together using an old can of mints which can be seen in the under picture.
Used two battery packs I had around, clear in the pictures. Intend to use 12v or 6v in practical application. 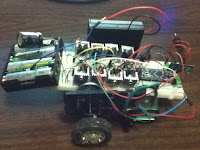 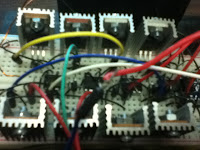 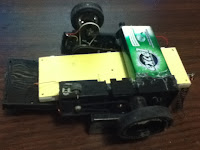 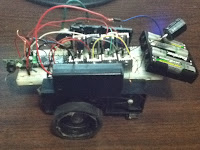 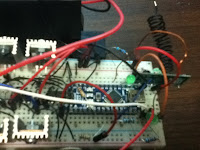 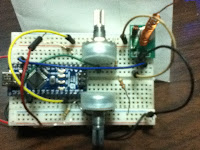 New Parts:
Spare Parts:
Requires about 7-17v for normal operation, although the Arduino could run on that while the transistors take much more with separate power supplies.

Again, the intent is to remote-control a lawn-mower with the cheapest, most accessible parts I can find. 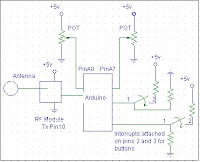 The code below uses pins A1 and A0 for LEDs. Schematic uses spare pins from 555 timers.

The JunkBot will sit and wait for commands by default, and check for RF signals. When an RF signal is received, variables are set and the pwm signal starts as the opposite pin(s) go HIGH or LOW respectively, causing a + or - signal with varying duty cycle to be sent through the motor(s). Wheels turn both forward and backwards. Control is fairly precise considering the mechanichal parts invovled.

Right now the JunkBot works fairly well and is easily controlled. It is not the fastest or best looking piece of work, but it functions great. The next step is going to be figuring out a way to build in automation for cutting a lawn on its own.

at February 01, 2012
Email ThisBlogThis!Share to TwitterShare to FacebookShare to Pinterest